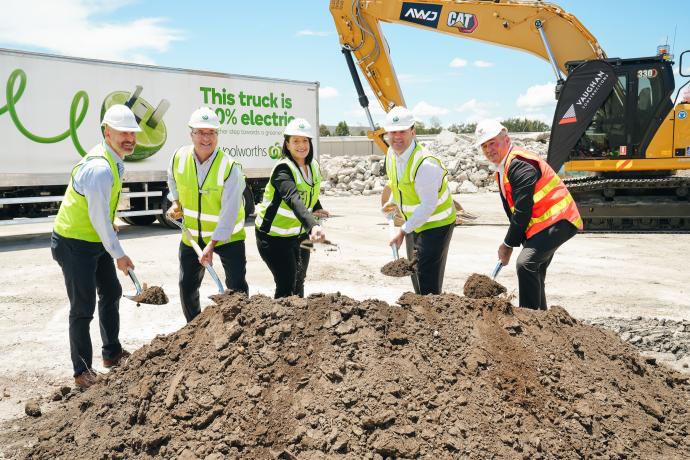 Vaughan Constructions has been awarded the contract to build a state-of-the-art, Customer Fulfilment Centre for Woolworths at Auburn in NSW.

The 22,000m², highly automated centre (CFC) will be built in partnership with Knapp, whose automation technology will help Woolworths’ personal shoppers pick and dispatch up to 50,000 home deliveries a week.

According to Vaughan’s General Manager NSW, Mark Cormack, the plans include provision for two levels of office space over 1,224m², a 16,300m²  temperature-controlled warehouse and freezer, loading and delivery docks with direct street access, and parking/loading/pick-up areas for more than 330 vehicles.

Mr Cormack said the team was very much looking forward to continuing the very successful Woolworths relationship, with the start of construction on the new Auburn facility being celebrated at a ground-breaking ceremony onsite with senior representatives from Vaughan, Woolworths and stakeholders.

''We’re very excited to play such an integral role in what will be the latest in online customer and delivery service for Woolworths in Western Sydney.

''Building state-of-the-art facilities for our market-leading clients is the sort of challenge that really drives our team to deliver exceptional results,’’ Mr Cormack said.

Due for practical completion in early 2023 the project is targeting at least a 5-Star Green Star Rating via rainwater harvesting, solar panels and electric vehicle charging facilities.