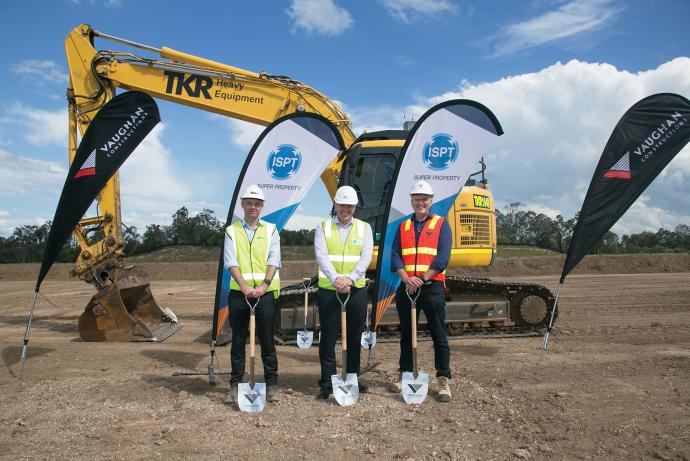 Vaughan Constructions has been engaged to deliver two new industrial facilities for industry super funds manager ISPT at Blacktown in NSW and Wacol, Queensland – the latter also in partnership with Aliro Group - with an end value totalling more than $42 million.

The speculative $30 million, circa 32,000m², Wacol project will comprise two 14,000m² plus, freestanding warehouses with associated offices and car parking and more than 14,000m² of hardstand. The buildings, to be broken down into five tenancies, will be located at ISPT’s Barracks at Metroplex estate on the interchange between Centenary Highway and Ipswich Motorway south-west of Brisbane.

Vaughan’s Senior Development Manager in Brisbane, Richard Lloyd, said the Wacol project - the first Vaughan project for ISPT and  Aliro in Queensland - was due for completion in June 2022.

"We are very pleased to have been chosen to bring our industry expertise to construct facilities for leading funds management players ISPT and Aliro in what is a growing market for Vaughans in Queensland as the industrial sector continues its very positive upward trajectory.

"The local industrial market, on the back of relatively sound economic fundamentals and a fairly heavy $25 billion infrastructure program including inland rail, road and port facilities, has been travelling remarkably well in what has been difficult times,’’ Mr Lloyd said.

He said he expected to complete the Wacol project midway through 2022.

Spokesperson for ISPT, Acting General Manager of Logistics & Warehousing, Tim Jackson, said the project was an important milestone for Barracks at Metroplex.

"We’re excited to commence this first stage of development. We look forward to working with our key partners to bring the estate to life,’’ Mr Jackson said.

"We look forward to cementing our relationship with ISPT on the Blacktown project at a time when demand from both tenants and investors for such facilities is at a premium nationwide and particularly in New South Wales,’’ Mr Cormack said.

He said the project - due for completion in February next - would feature LED lighting, rainwater harvesting and a 99kw solar panel system on each of the two tenancies.

Vaughan has contracted for industrial building works nationally totalling more than $300 million over the last 12 months, driven by the massive surge in online retailing and the concomitant spike in warehousing and distribution requirements, including up to 100,000 square metres of projects either under construction or in the pipeline in New South Wales with an end value of more than $90 million.

Mr Lloyd said the firm’s business in the sunshine state had also surged following the opening of the Brisbane office in March last year with the Wacol contract following other notable projects including the completion of work on the Sheraton Mirage at Port Douglas, a $40 million warehouse for McPhee Distribution Services at Berrinba, and a $184 million distribution centre for Woolworths at Heathwood.