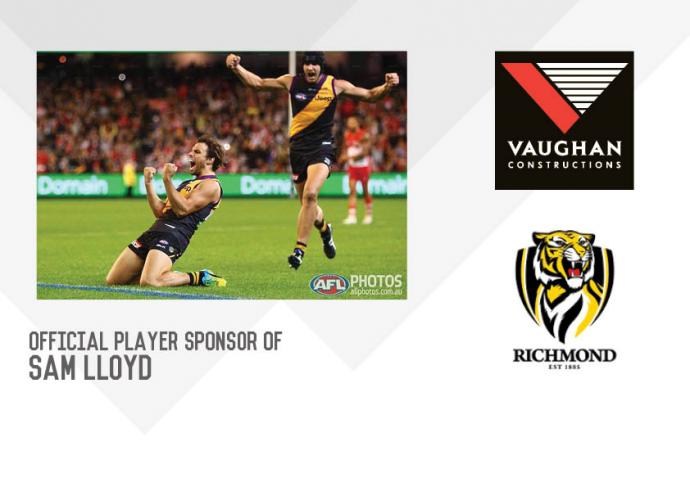 Vaughan Constructions will continue their support as the official player sponsor of Richmond Club favourite and former employee Sam Lloyd, for the 2017 season.

A standout player in 2016, Tiger’s fans voted Sam’s sensational grab against Adelaide in round three together with his goal in the dying seconds against Sydney, in round eight as the best of the season.

Lloyd’s performance in 2016 highlighted his propensity to wreak havoc for opposition defences, both in the air and at ground level

Sam worked at Vaughan Constructions before heading to the Frankston Dolphins to commit himself to an AFL career. Drafted in 2013, he has proven himself an integral member of the Yellow and Black.

Conscious of life after the game, Lloyd has continued to pursue his passion for the construction industry continuing his studies in carpentry in pursuit of becoming a registered building practitioner.

When asked about Vaughan Constructions continuing support of his career, Lloyd noted “I am very grateful to Vaughan for the ongoing commitment they have shown to me personally and my professional sporting career. The culture of the organisation is such that I formed exceptional relationships during my time there. It is great to know that I still have the backing of all the team.”