Vaughan apprentice back at Brighton Grammar 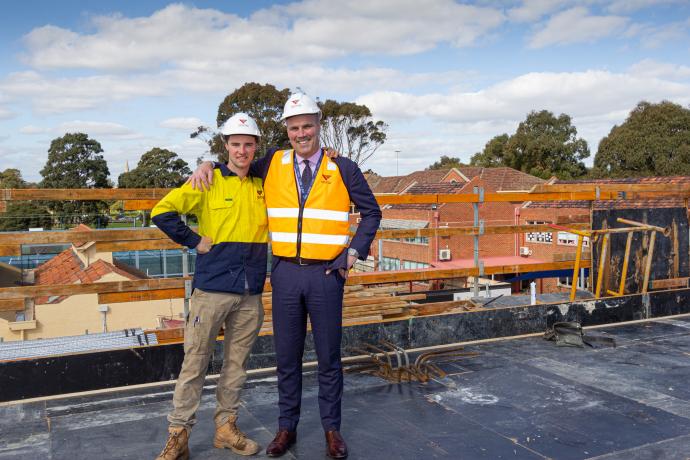 Vaughan Constructions is delivering a refurbished hall and an indoor pool facility at the Brighton Grammar Junior School.

The hall portion of the project includes the demolition of the roof and high portions of the reinforced brick walls of the existing hall and construction of two additional levels. The new construction and refurbishment will provide the school with a new hall, offices, classrooms and a large adventure space.

The new pool structure will house the existing pool and include bathrooms, change rooms, offices and a reception area.

Working on this project is Vaughan apprentice and Brighton Grammar alumni, Tom Sharry.

‘’I loved the culture at the school, it is a really tightknit community. We had small year levels so you have the opportunity to really engage with everyone in your year level, as well as make connections in other year levels’’ Tom said.

It was at school where Tom’s passion for the construction industry was realised.

‘’I had always had an interest in construction and as I took woodworking classes with Mr Green, I found that I really enjoyed the process of building something.  It was these classes that inspired me to forge a career in construction.”

Being back at Brighton Grammar has given Tom a sense of nostalgia as he reminisced about playing footy, creating chants for sports days and his speech at valedictory.

Tom was one of the two students of his graduating year to make a speech at valedictory, where he had the opportunity to share his perspective of his time at school.

Headmaster Ross Featherston noted that Tom’s speech was particularly memorable as it was emotional and motivational.

‘’It was great to see Tom grow and find his own path while at school. He really flourished when he took on the guidance of the Head of Senior School, Dr Swann. He had a big impact on Tom,” Headmaster Ross Featherston said.

“It is excellent to see Tom back at Brighton Grammar. He left the school with a vision and here he is achieving his goals and creating a career in construction. We are thrilled to see him back,” continued Headmaster Ross Featherston.
Tom graduated in 2016 and started trade school at Holmesglen in Chadstone and then began working at Vaughan Constructions in early 2017.

The Brighton Grammar project is due for completion in April 2020.